In this tutorial I’ll walk you through how to define a custom QML Component as a singleton.

UPDATE: I uploaded a new sample code which better outlines the difference between using an instance of MyStyleObject and using the singleton MySingletonStyleObject.You can download it here.

Currently I’m working on a rather large Qt Quick application which will be deployed on an embedded device. I’m starting to notice performance issues as we add more and more screens to the application. I decided to run the QML Profiler that is part of Qt Creator and one of the things I noticed was that one of our QML Components is being created 1500+ times. This component is an Item which holds a number of properties defining different styling options like what the colour Blue is for our purposes; its our style sheet. The issue being that its loading non-standard fonts which is expensive so as it turns out we’re loading the fonts 1500+ times.

Each screen/page in the application is instantiating its own copy of the style object as we weren’t really keen on defining one globally and simply referring to it. I mean really there is nothing wrong with that approach per-say but it does relay on a dependency; that someone instantiated the object somewhere in the application and that the objects id never changes.

So how can I reduce the number of instantiated objects without depending on a locked in stone id name?

So as it turns out Qt Quick does have a mechanism to let you define a QML component as a singleton. I didn’t even think to see if that was even an option, a college mentioned it to me in passing and they only knew about it as a one line statement on a blog post.

Ok so its a thing but how do you do it?

There are three steps you need to do; first you need to use the pragma Singleton keyword in your QML script, then you need to register the component as a singleton, and lastly you need to import it into your other QML scripts which are going to use it.

Step 1: Declaring the QML Component as a Singleton

Lets say this is your style sheet QML object that you want to make a singleton.

To declare it as a singleton you need to add the keywords pragma Singleton to the top of the script file.

Now you have two options you can either register the Component in C++ or by using a qmldir file.

To register the singleton via C++ somewhere in your C++ code you need to call qmlRegisterSingletonType().

If adding the call to qmlRegisterSingletonType() won’t work for you, maybe this is a Qt Quick UI project (i.e. no C++ ) then you can add a file called qmldir to the directory where your MyStyleObject.qml file exists. When importing a directory the QML Engine first looks for the qmldir file and uses it to import the scripts found in that directory; if the file does not exist it will import the scripts found with default values (i.e. non-singletons and uses the file name as the component name). The qmldir file can define different names to be used instead of the file name and can also tell the import to register the script as a singleton.

Here is what the directory structure should look like:

Here is how to define the qmldir file:

Notice that if a script is found in the directory but is not declared in the qmldir file it still gets import but uses the default settings. MySwich.qml will be imported and registered using the name MySwitch as a non-singleton. You can see here that we can also use qmldir to define a different name other then the file name for the component, MyButton was registered to use the file name per the default but AnotherObject.qml was registered to use the name MyOtherObject.

Step 3: Importing and Using the Singleton

If you used the qmldir approach then you simply need to import the directory which will register all the scripts under that directory.

Note here however that if main.qml was within the path directory you would still have to import the path as it does not appear that the qmldir file gets used when you relay on the auto look up path.

So what does this buy us?

Example time: lets say we create an app that shows 100 blue boxes with red boarders on the screen. We'll use the MyStyleObject component to hold what shade of blue Blue is and the thickness of the boarder. 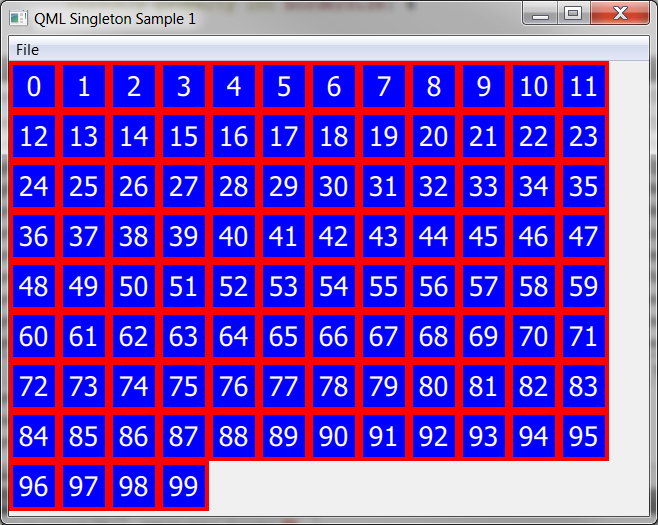 How we'll achieve this is by using a GridView with a integer model of 100 and the MyStyleObject will be created within the delegate.

Once our application has launched we can press the stop button on the Analyze view to terminate the application and stop the profiler. It will then load the data into the view.

By instantiating an instance of the MyStyleObject within the delegate you can see it gets created 100 times which takes 12.084ms; binded to 99 times which takes 1.130ms and that the compile phase for the object (which only happens once) takes 708.820µs.

If we change this into a singleton and run the same profiler we'll find that now the object is only created once (474.917µs); although the compile phase does take longer (1.917ms) your still saving about 10ms. This might not seem like a lot over all but when your trying to keep the presentation of your application at 60FPS every little bit helps.

So there you go that is all you have to do to define a QML Component as a singleton so that it only gets created once.

You can download a sample application which illustrate the above here:
QML Singleton Sample 1.1 - Updated to be more clear.